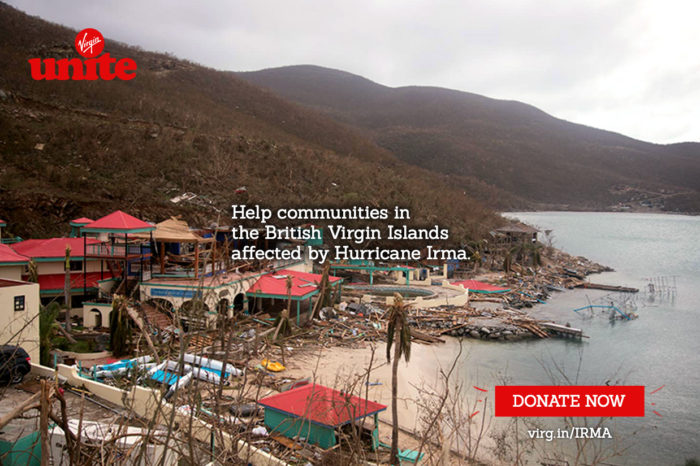 Before the storm, it’s easy to believe that things will return to normal relatively quickly. It can be hard to imagine the devastation and long road to recovery, unless you have lived through one before.

The Branson Centre of Entrepreneurship – Caribbean has our Country Manager – Debbie Bell – and 18 entrepreneurs based in the British Virgin Islands (BVI). On Sep 6, 2017, BVI received a direct hit from Hurricane Irma at Category 5 strength, with sustained winds of 185 miles per hour. The damage was catastrophic to the island – disrupting all communications, destroying property, rendering roads impassable.

We went thirty-four hours without hearing a word from Tortola, where Debbie and many of our entrepreneurs are based. Cell phone towers had been destroyed, telephone lines were all down, and there was no internet. The only way to reach the island was through the few people who had invested in a satellite phone. There was a communications blackout.

It is nearly impossible to respond effectively with no communications. Our head office in Jamaica reached out to the Virgin Unite team in the UK to find out what we could do. They had contacted Richard Branson on Necker Island by satellite phone with an intermittent signal. But there was still no word from Tortola. All we could do was wait anxiously.

We obsessively refreshed Twitter for news from Tortola. It led us to a Facebook group, BVI Abroad – Hurricane Irma, that had an updated list of persons who were confirmed safe on Tortola. We added our people to the list and checked for updates. We found Debbie’s house on Google Maps and shared it, hoping that someone would be able to check on her.

As the videos and images continue coming in, my heart breaks for the destruction on those beautiful islands. While we are lucky to have not yet received any reports of injuries or worse, we have received reports of severe damage to properties and livelihoods, including a few reports of entrepreneurs that are now homeless.

Virgin Unite, Unite BVI, and Virgin Limited Edition have set up a campaign to support local BVI communities in the medium to long term. https://www.virgin.com/unite/bvi-community-support-appeal.

Thank you so much for your messages of concern and support during this extremely challenging time. We will continue to keep you updated over the coming days and weeks.

Let’s work together to help our entrepreneurs get back on their feet.